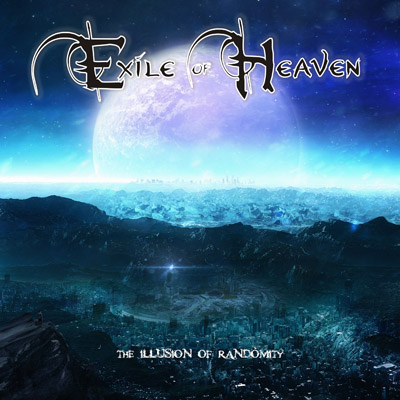 Album: The Illusion of Randomity

Some words for the band:
“THE TIME HAS COME! Greek Heavy Metallers Exile of Heaven present their long awaited debut album, entitled “The Illusion of Randomity”! After nearly two years of preparations, get ready for an awesome album, full of great compositions, melody, passion and overall epicness! With a 4-man standard line up as a core, the metallers from Kozani bring a fresh, yet familiar, sound to the table, including melodic heavy riffs, beautiful vocal lines and an overwhelming atmosphere. Their lyrics are deep, powerful and emotional and always work on many layers for the listener to discover. The album’s artwork is designed by Mark Eskine and is a state of the art by itself. If you are looking for some exhilarating but also meaningful music that combines Heavy and Power metal elements with full melody into catchy songs, look no further. Exile of Heaven are HERE and they are kicking major ass!