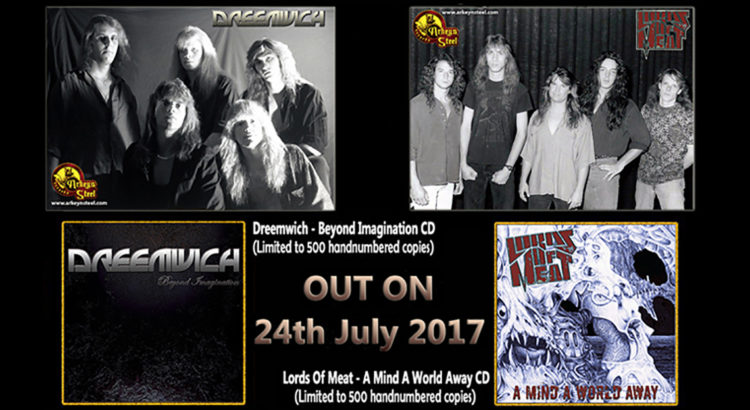 YES!! SOMETIMES OUR DREAMS COME TRUE, AND IT’S A REAL…
…LYRICAL US MELODIC METAL FROM THE ICONS OF KANSAS!

The band focused on writing and recording their debut self titled EP – first released in 1989. After this first release and gaining professional management, the band began performing a series of live gigs in and around Topeka and Kansas City, Missouri, helping to build a following of dedicated fans. Five months after the release of the EP, guitarist Ronnie Fields would depart from the band. To fill in temporarily, the band enlisted the services of two local guitarists. First, Steve Schneider added his blistering guitar riffs to the recording of a second 5 song demo and performed a few shows with the band. This was followed by guitarist Mark Case, who added his depth of talent to the band on it’s first mini tour through the Midwest and West Coast.

Upon returning home, another line-up change would force the search for a new lead vocalist as well. In the spring of 1990, Dave Buller’s melodic guitar playing, along with Bryan Cowsert’s strong vocal delivery and energetic performance style, ushered in the next Dreemwich phase.

This line-up recorded a three song demo of which two songs were included on the Midwest Metal Fest compilation released by Ground Zero Entertainment. Fresh out of the studio, this new incarnation of Dreemwich embarked on a 45 day tour of the East Coast and upper Midwest.

Then in late 1990, a third line up change brought Karl Keller’s dynamic vocals along with the richly textured guitar work of Scott Shipps. After months of writing new material and numerous live gigs with Karl and Scott, Dreemwich would begin work on a fourth demo (unreleased & sadly unfinished) as well as perform showcases in Los Angeles and Chicago before disagreements with management led to their disbanding in 1992.

Arkeyn Steel Records have managed to track down this excellent band. We dug very deeply and release their entire back catalogue (17 songs in total, more than 78’ minutes of music including everything that the band has ever recorded). It seemed impossible but we finally made it.
As usual all songs remastered from original tapes for the best sound journey.
Comes in 16-page fat glossy booklet with lyrics, band story and full of unreleased pics.
Another US Lyrical Power jewel will be released the way it deserves!
Fans of QUEENSRYCHE, FATES WARNING, LETHAL, HEIR APPARENT, RECON & SACRED WARRIOR must have it!

JUSTICE IS FINALLY DONE!
THE US POWER/SPEED METAL PIONEERS OF CHICAGO WITH SCOTT HUFFMAN (Syris, Spirit Web, Mindwarp Chamber, Twelfth Gate etc) ON VOX, GIVE US ONE OF THE BEST REISSUES OF 2017!

Lords Of Meat – A Mind A World Away CD

In 1991, four high school friends in the Chicago suburbs; Steve Stefani, Michael Konopka, Adam Polzin, and Oliver Schmidt, united to form a band and produce a killer metal sound that would violate the ears of every man, woman, and child in the universe.

Countless nights and weekends in Mike’s parent’s basement soon followed, and after crafting a handful of original songs, the band was ready for a vocalist. An ad placed in the local Illinois Entertainer magazine was answered by Scott Huffman (Syris, Spirit Web, Mindwarp Chamber, Twelfth Gate etc). Scott’s strong vocals and original lyrics were a perfect match for the shredding guitar, thunderous drums, and mind-blowing bass that gave the band its signature sound. Lords of Meat was born!

In 1993, “A Mind A World Away” was recorded at Metropolis Studios and released on 500 cassette tapes, with another 100 CDRs soon to follow.

Arkeyn Steel’s “A Mind A World Away” CD features both the band’s demos – “A Mind A World Away” (1993) and the unreleased Live Demo 1992.
This great reissue features re-mix of the songs that appeared on the bands Demo 1993 and as usual all the songs have been digital remastered for the best possible sound experience. Unreleased photos plus bio and lyrics complete the package.
Don’t miss your chance to listen this perfect US metal power!!
For fans of Oliver Magnum, Helstar, Syris, Toxik, Vicious Rumors!