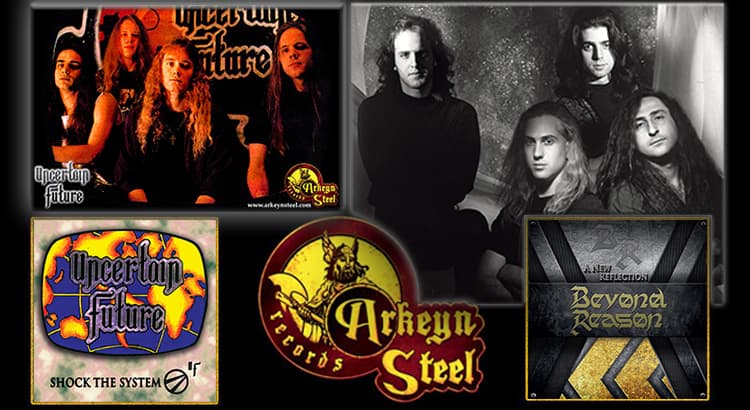 For those who have been asking “Where have we been?”, for those who keep on writing to us asking for updates and new releases, well this one is for you. It is a fact that we don’t let a single day to pass without searching for stuff to release, however the bands and the music that would fit our and your high standards are the main goal, so expect only hand-picked releases even if it takes a little more time for them to happen. So it is time to announce two forthcoming releases that will blow your US Metal minds away. Here we go:

Uncertain Future – Shock The System CD (Limited to 500 hand-numbered copies)
ONLY FIRST 50 COPIES WILL ARRIVE WITH PRO-PRINT PROMO PICTURE!
Uncertain Future from Kansas City, Missouri, USA delivered fine Power / Prog Metal in the vein of Queensryche, Lethal, and Mystic Force. They have released one demo tape back in 1991 and a private CD two years later (1993). Those aware of the band’s existence were always keeping a high slot on their want lists for those releases, especially for the “Shock The System” private CD which was limited to 500 copies and was sold for more than $300 among collectors. Well now the search is over. Arkeyn Steel Records brings back to light the entire catalog of one of the finest Metal bands from Missouri. The Arkeyn Steel release includes the entire “Shock The System” private CD (1993), the entire “Peace By Peace” demo (1991) plus the band’s “Floodgate” unreleased demo (1999). Get ready to satisfy your thirst for Ryche-influenced US Power / Prog Metal under a real shock! Everything has been re-mastered and packed with lyrics, inner notes and unreleased photos under a concept based on the original “Shock The System” CD artwork.

Beyond Reason – A New Reflection CD (Limited to 500 hand numbered copies)
ONLY FIRST 50 COPIES WILL ARRIVE WITH PRO-PRINT PROMO PICTURE!
Beyond Reason from Westchester, New York, USA delivered technical Power / Speed Metal in the vein of early Metal Church, Intruder and Final Assault. It is this fine mixture of raw power with technical elements that makes this band so special. Their two demos released in the early 90s have disappeared ages ago. Arkeyn Steel Records has managed to track down the band, presenting everything they have officially recorded and released plus all their unreleased material on a single CD. “A New Reflection” includes the “…Distant From Reality” demo (1990), the “Beast Of Change” demo (1992) plus 3 unreleased tracks from 1991. Get ready to feel the absolute power of a great band! Everything has been re-mastered from scratch, brought to you in a great package including lyrics, a biography and lots of never-before-seen photos.